From library aisles to life as an artist
December 29th, 2008
The first time Paul Boultbee got an education, it was to prepare for a sensible, stable career in library sciences. The second time around, he threw sensibility to the wind and did something completely creative.

Boultbee was 48 when he enrolled in the visual arts program at Red Deer College in 2000 to learn about painting, drawing and ceramics. Up to then, the Red Deer resident had been working full-time as a college librarian and satisfying his imaginative side by plunging himself into community theatre.

Boultbee’s dramatic and comedic talents have long been known to Red Deer audiences. He’s tackled all kinds of stage roles with amateur theatre groups and small professional companies over the last 25 years, even portraying God and Shakespeare. Boultbee has trodden the boards on Red Deer College’s Mainstage, and was featured in productions staged by Prime Stock Theatre, Take a Risk Theatre and Ignition Theatre, for which he just wrapped up a run in Deathtrap.

While he still considers acting to be a fulfilling hobby, Boultbee said there was something about being constantly surrounded by painters and sculptors and the products of their inventiveness at Red Deer College that made him yearn to work with his hands. “I was constantly surrounded by people being creative. I thought I’d love to do visual arts, but I have to learn how to do that,” recalled Boultbee.

He took a leap of faith and went back to school after getting the thumbs up from his wife, Glynis Wilson Boultbee, who had herself quit a good job to become a consultant. Once Glynis received news that a 52-year-old friend died from a terminal illness, “she turned to me and said, ‘You’ve got to do this now,’ ” recalled Boultbee, who was encouraged by the fact that his house mortgage was a year from being paid off.

He wanted to learn as much as he could about various art forms, “so I took advantage of every course they had” — from painting to printmaking and ceramics. He stretched a two-year program into three years, graduating in 2003.

Boultbee, who is now 57, still works as a librarian two days a week, but also runs alleyscape studio, next to The Velvet Olive in downtown Red Deer’s most happening alley, behind Sunworks on Ross Street. There he creates, exhibits and sells artwork — both his own and pieces created by other local artists. “I say I’m coming here to work, but it’s not really working,” said the artist, who loves what he does.

Boultbee’s abstract art was recently featured in a multimedia presentation called Songs of Service. Works of the poet Robert Service were set to music composed by Bruce Jacobson and accompanied by Boultbee’s atmospheric works. Boultbee also collaborated with his wife on another multimedia show of poetry and artwork that will be exhibited next summer at the Squamish, B.C., library. And earlier this year, he was asked to be a visiting ceramics instructor at the college, where he enjoyed answering students’ questions and maintained “I learned as much as they did.”

You could say that learning is the theme of Boultbee’s life. “I like the process. . . . Whatever I do, I learn something from — even if it’s that I don’t like to do it,” said Boultbee with a laugh.

He was born into a family who valued education in Paris, Ont., and later attended university in nearby London, Ont. “I used to tell people I was born in Paris and studied in London, but I could never keep a straight face,” said Boultbee.

He credits his early art exposure to his grandmother, who insisted on taking him to the Art Gallery of Ontario whenever he visited her in Toronto. Boultbee’s parents were also very supportive of his theatre hobby, which started when he was cast in an English pantomime about Old Mother Hubbard at the age of 12. “I was the principal boy,” he recalled, with a chuckle. But there was never any possibility acting would become his career. “I was a child of the ’50s,” he said. “I grew up in an age where you went to university to get a job.”

After graduating with his librarian degree, Boultbee got a position at a college in the Bahamas, which had just shed its colonial past. While living in the balmy Caribbean in the late 1970s, he recalled acting in a community theatre production of The Wedding Band, a play about an interracial couple in the Southern U.S. in 1918. Boultbee remembers it being particularly poignant because all the black characters were really played by blacks who had undoubtedly experienced racial issues. Once again he was reminded of why he loves the theatre: “It allows me to be somebody I’m not and to do and say things that I, Paul Boultbee, would never say or do.”

After six years, Boultbee realized it was time to head back to Canada. Bahamians had been trained to do his job, and he said he wanted to quit before he was asked to leave. He moved to Red Deer to work at the college library in 1982 and within the week had won a role with Central Alberta Theatre. Boultbee said acting was always his conduit to meeting people in the community. “I always knew what was going on and how to conduct myself in that world.” Later on, he gravitated more towards working in college and professional theatre productions, “because I could learn so much. It’s a way to learn without paying tuition.”

Boultbee met his wife at Red Deer College. It turned out that he and Glynis, who was a colleague, had once worked within blocks of each other in Toronto but had to move thousands of kilometres west to become acquainted. Glynis, who founded the artsparks theatre program for developmentally disabled youths and adults, shares Boultbee’s love of the arts.

Creative people need creative outlets, Boultbee reasoned — “but you have to find the right balance and that is different for everybody.” He feels choices such as reducing his work hours in the library and going back to university have gone along with the decision he and his wife made not to have children. Having a flexible employer at Red Deer College and an encouraging spouse have also been major freeing factors that have enabled him to live a creative life. “Nobody said to me, ‘How crazy are you?’ They’ve been very supportive. . . . It’s been a real bonus.”

So far, the payoff has not been monetary. Boultbee said his artistic earnings just cover his studio rent. But when the librarian-turned-actor-turned-artist took account of his existence one recent grey morning, he decided that what he spends his time doing “is not a job, it’s a joy.” And that is worth a lot. 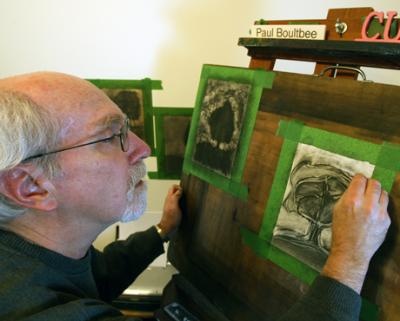